“Ew, it feels like brains!” Ellie exclaimed, as she squished her hand around in the orange goo. She scooped out a chunk of the pumpkin’s insides and plopped it on the table.

“How do you know what brains feel like if you don’t have one?” Penny asked. Her laugh echoed through the kitchen that smelled like pumpkin and cinnamon. 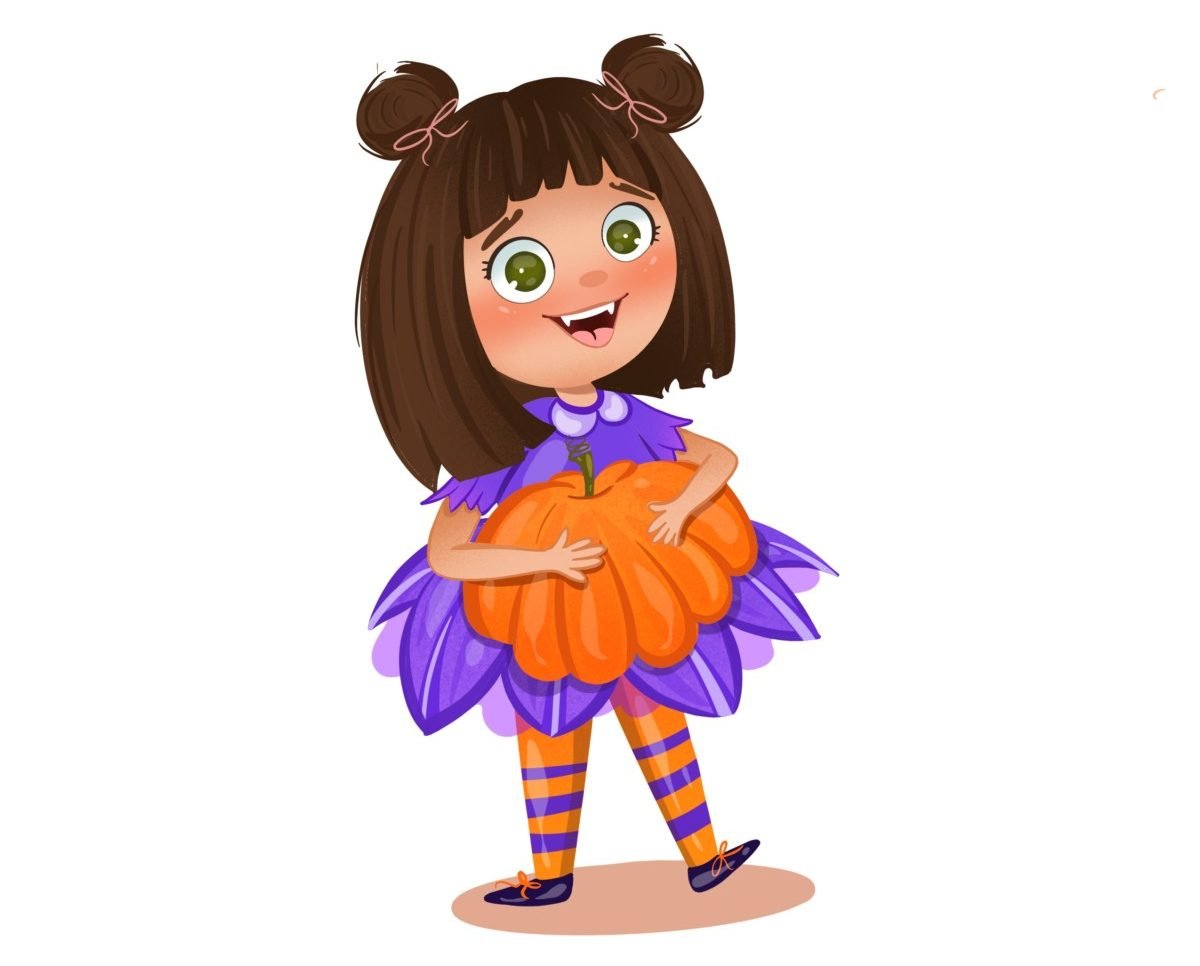 Ellie’s face turned red and she bit her lip to stop herself from saying something mean to her little sister. She couldn’t fight with Penny for the next 15 minutes. She shifted her focus to the two pumpkins on the table.

“You know, I’m in charge right now, so you should be nice to me,” Ellie said, as she scooped out another handful of seeds. She had never babysat Penny before, and needed to prove she was responsible so she could go to the Fall Dance next week.

Penny laughed again. “Yeah, in charge for a whole 15 minutes while Mom and Dad go buy Halloween candy. That’s not even real babysitting.”

Ellie took a deep breath and let out a long exhale. She looked over at Penny struggling to scoop the last of her pumpkin out and gave the biggest fangy smile she could manage.

“Here. I’ll help you with that,” Ellie offered. She snatched the pumpkin away before Penny could protest and shoved her hand into its cold and gloopy center. She could feel seeds sliding through her knuckles as she grabbed a chunk of the wet guts. She tried to yank her hand out, but her fist was too big for the hole. She gave the pumpkin a shake, but nothing happened—her hand was stuck. So she tried once more, shaking even harder.

Her hand was free! But so was the pumpkin. It rolled to the edge of the wooden table and Ellie dove to save it. She scooped it up just before it rolled off the edge.

Penny stared at her sister with her mouth hanging open. “You almost ruined my pumpkin!”

“Yeah, but I saved it,” Ellie beamed. She proudly held up the pumpkin to show Penny that it was fine.

A gust of cool wind knocked over a small plant on the windowsill.

The loud sound startled Ellie, causing her to turn into a bat. The pumpkin was now too heavy and rocketed to the ground—splattering everywhere.

Tears welled up in Penny’s big eyes. “You ruined my pumpkin!” she cried with a trembling lip.

POOF! Ellie transformed back into a vampire.

“I didn’t mean to.” Ellie defended, as she looked down at the orange mess. “That falling plant scared me!”

“Everything scares you, Scaredy Bat. You’re the worst babysitter ever!” Penny declared. She picked up chunks of pumpkin off the floor and started throwing them at Ellie.

“Stop!” Ellie demanded in her most serious voice. But Penny continued.

“Yeah, well, I wish you had a pumpkin head!” Ellie yelled back, as she picked pumpkin bits off the floor. Suddenly, chunks of pumpkin stopped raining down on Ellie. “Thank you,” she said with a sigh of relief. “Now can you help me clean this up?” Ellie waited for an answer, but Penny was completely silent—and Penny was never silent.

Ellie looked up to see her sister standing there. But where her head used to be, there was now a big, orange pumpkin. 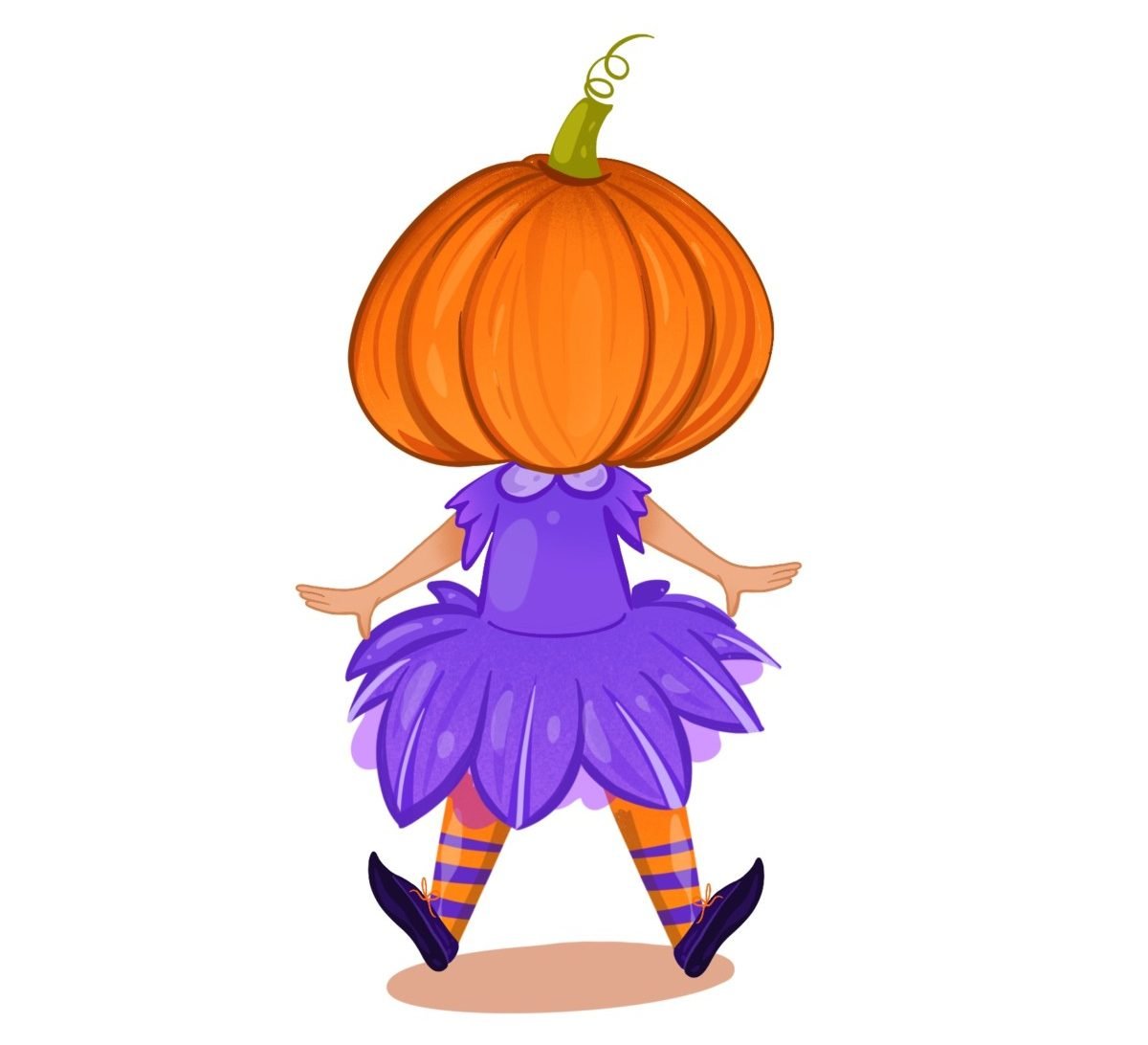 Ellie laughed. “Very funny. Now take my pumpkin off your head and help me clean up this mess.”

Penny didn’t say anything. She simply shook her head.

“Fine. I’ll get it off for you.” Ellie grabbed her sister’s orange, vegetable head and gave it a tug. But it wouldn’t budge.

The front door swung open. Ellie could hear the voices of her best friends, Jessica, Tink, and Fez.

“We’re here!” they all said in unison. They plopped their sleeping bags down in the entrance then came into the kitchen. After trick-or-treating together tonight, they were having a Halloween sleepover.

“Wow, it looks like a pumpkin exploded in here,” Tink said, as he looked around the kitchen splattered with orange goo.

Fez sniffed the air. “Yum, smells like it too.”

Ellie explained the pumpkin incident and how Penny got a pumpkin stuck on her head.

“I think she’s just trying to get me in trouble! If I don’t get this off her head before my parents get home, I won’t be able to go to the Fall Dance next week.”

“But I already made you a headband to go with your dress!” Jessica gasped.

“And I hear they are going to be serving pigs in a blanket!” Fez said with equal shock.

Jessica glared at Fez. “Somehow, I feel like the headband is more important than a snack.”

“Pfft!” Fez scoffed as he crossed his arms. “Clearly you have never had pigs in a blanket.”

Tink cleared his throat. “Or maybe, just maybe, Ellie is more worried about missing the dance.”

“Exactly!” Ellie said, agreeing with Tink. “But I don’t have to miss it if I can get this pumpkin off of her head.”

“Then let’s get to work,” Jessica said, rolling up her sleeves.

They grabbed some butter from the dish and rubbed it around Penny’s neck. They pulled and pulled, but it wouldn’t move. Next, they tried some pumpkin guts, but it still wouldn’t budge.

Out of breath, Ellie plunked down beside her pumpkin that was still sitting on the table. She looked at the pumpkin stuck on Penny’s head and then the clock ticking on the wall. They were running out of time.

“Any other ideas?” Ellie asked.

Tink grabbed a book from his backpack. He plopped it on the counter and flipped open to the page, ‘Halloween and the Full Moon.’

“Some legends say that the full moon on Halloween has magic wishing powers. It will grant you a wish, but it won’t always last, and you only get one. Maybe you can wish for Penny to not have a pumpkin head?”

“Do you believe in that?” Jessica asked.

Tink shrugged. “Not really. But weirder things have happened. After all, I am friends with two vampires.” He looked at Ellie and Jessica and gave a small shrug.

Everyone closed their eyes.

“I wish for a pet llama!” Fez announced first.

Jessica snickered. “And I wish for that llama to have cute boots.”

“I wish for the llama to have science goggles on!” Tink added with a laugh.

Ellie opened her eyes. “Guys! You have to be serious. I’m-” Ellie gasped. A fuzzy white llama was standing in her kitchen. It had leopard print boots and a pair of goggles on.

“It worked!” Fez said excitedly, as he gave the llama a pat.

Tink’s shoulders slumped. “I wasted my wish on llama goggles… I could have wished for my own lab or something.”

Ellie quickly shut her eyes. “I wish for Penny to no longer have a pumpkin on her head.” She opened her eyes, hoping to see Penny’s face. But instead, she still had a big, orange vegetable for a head.

“Why didn’t it work?!” Ellie shrieked.

Penny raced out of the kitchen as the llama began licking the pumpkin on the table.

“Oops, sorry,” said Fez. “Shoo, Trevor. Leave her pumpkin alone.” He led the llama away from the pumpkin. A llama that Fez had apparently already named.

“No, we only had two pumpkins,” Ellie explained. “If mine is still on the table and Penny’s is broken... My wish from earlier came true and I made Penny into a pumpkin head. That’s why we can’t get the pumpkin off—that’s her new head!”

The front door creaked open. “We’re home!” chimed a cheerful voice. The sound of Ellie’s father’s voice made her heart leap into her throat. She was in so much trouble.

“Hide the llama,” Ellie whispered to her friends. She needed to find her sister before her parents did…

“What on earth is on your head?” Ellie heard Mrs. Spark say.

…But it was too late.

“Ellie got a pumpkin stuck on my head!” Penny whined.

Ellie burst into the entryway, closing the kitchen door behind her. “I did not. I just-” She looked at Penny, who now had a hat shaped like a pumpkin on her head.

Mr. Spark laughed as he pulled off the hat. “Tada. It’s not stuck anymore.”

Penny patted around her face and head. “No, it was a real pumpkin! She wished I was a pumpkin head and it came true.”

“Well, you will have to tell me more as we put on your costume for trick-or-treating.” 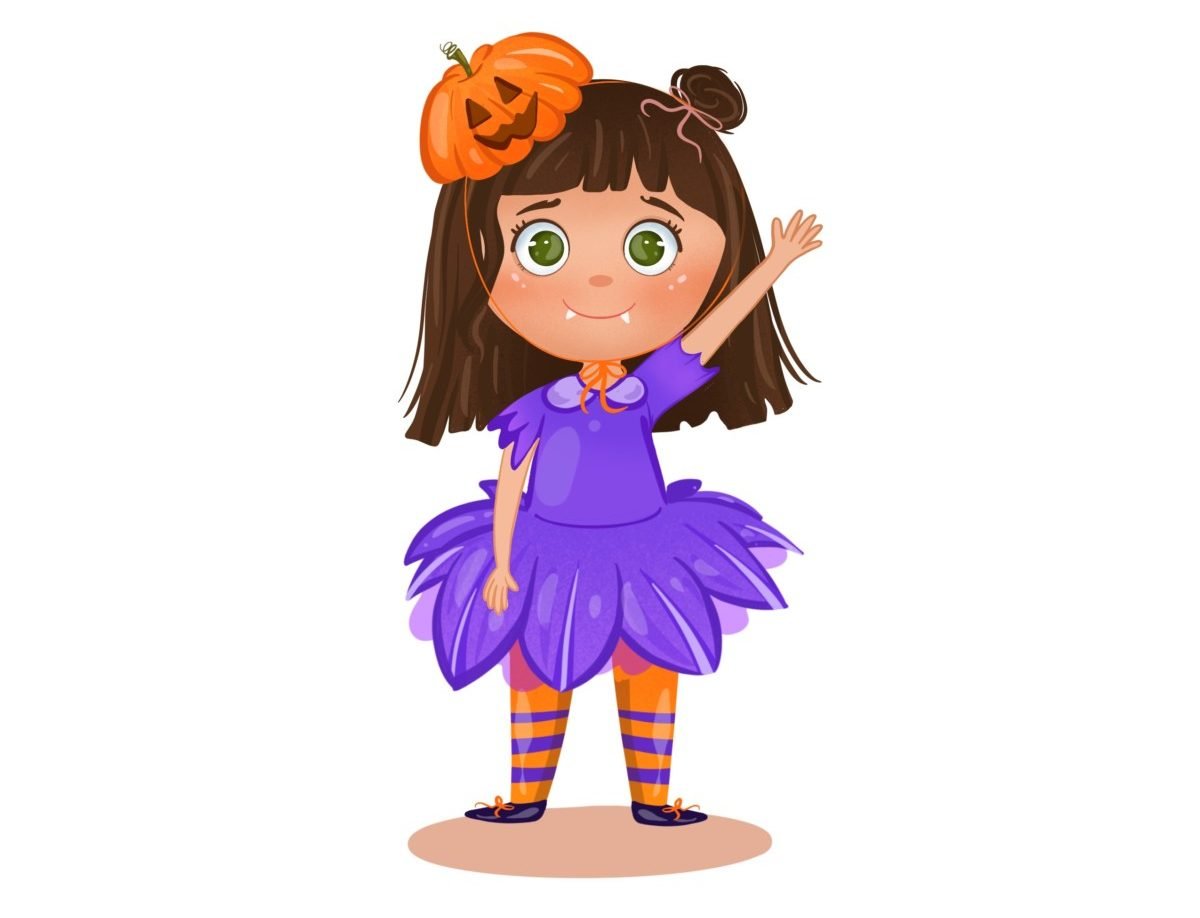 Mr. Spark stepped around Ellie and opened the kitchen door.

“Is that a llama in the kitchen?” Mr. Spark asked.

Ellie felt like she was going to be sick. She stepped into the kitchen just in time to see her Dad grab the ribbon off the counter for Penny’s jellyfish costume. Then, he walked over to the llama and gave it a quick pat.

“That is a great costume, Fez!” Mr. Spark said with a chuckle. “Very realistic.” Then, he left the kitchen and closed the door behind him. Ellie let out a sigh of relief.

Fez popped up from behind the counter. “I think I cleaned all the pumpkin!”

“Thanks,” Ellie said with a smile. She looked at the full moon’s light streaming in through the kitchen window. “The pumpkin head wish wore off. I think we’re in the clear.”

Mrs. Spark walked into the kitchen and Fez ducked back behind the counter once again.

“Hi everyone,” she said with a wave.

The llama walked over to a cat dish towel hanging from the oven’s handle and started gnawing on it.

“Umm, why is Fez eating my dish towel?” Mrs. Spark asked. “And why is he wearing leopard print booties?”

Ellie looked at her friends and laughed. “It’s a mystery!”

Want to find out what else happens on Halloween night?

Join Ellie, Jessica, Fez, and Tink on another mystery-solving adventure in Scaredy Bat and the Costumed Cats! You can find the story in this FREE Halloween Anthology eBook - a collection of 10 spine-tingling Halloween short stories from some of your favorite middle grade authors!