Scaredy Bat and the Costumed Cats

Scaredy Bat and the Costumed Cats

Creeeeak! The door to the old house opened a crack.

“Trick or Treat!” Ellie, Jessica, and Fez said in unison as they held out their candy buckets.

A wide-eyed, plump mouse scuttled through the crack of the door and raced over the crunchy leaves littering the doorstep. It dove through a small gap in a tree and its round bottom got stuck for a second. But with a little butt wiggle, the chunky creature was able to squeeze through.

“Hey Jess, aren’t you going to get that mouse?” Ellie asked with a smirk.

Fez laughed, making all the string glued to his costume wriggle like worms.

Jessica rolled her eyes and let out a groan. “I get it. Because I’m dressed as a cat.”

Jessica held up one of her paw gloves. “Are you paw-sitive about that?” Everyone laughed.

Ellie adjusted her red nose and rainbow wig before turning back to the door. Just as she was about to poke her head in to see if anyone was there, a boy named Tink stepped outside—shutting the door behind him.

“This is a bigger costume problem,” Tink explained as he pushed open the door.

Fez’s eyes grew wide with excitement when he saw the dozens of cats running around in costumes. There was a kitten in a lion outfit chasing a dinosaur cat, a banana licking a pirate, a mermaid sleeping on the sofa, and a cat with bat wings swinging on the curtains. And just as they all stepped inside the house, a cat wearing a lab coat and goggles raced through their legs in the direction of the mouse.

“Best. Halloween. Ever!” squealed Fez as he waved to the cats with both hands. “Hi, kitties!”

“No, this is bad. Really, REALLY bad!” Tink cried. “These aren’t just any cats.” 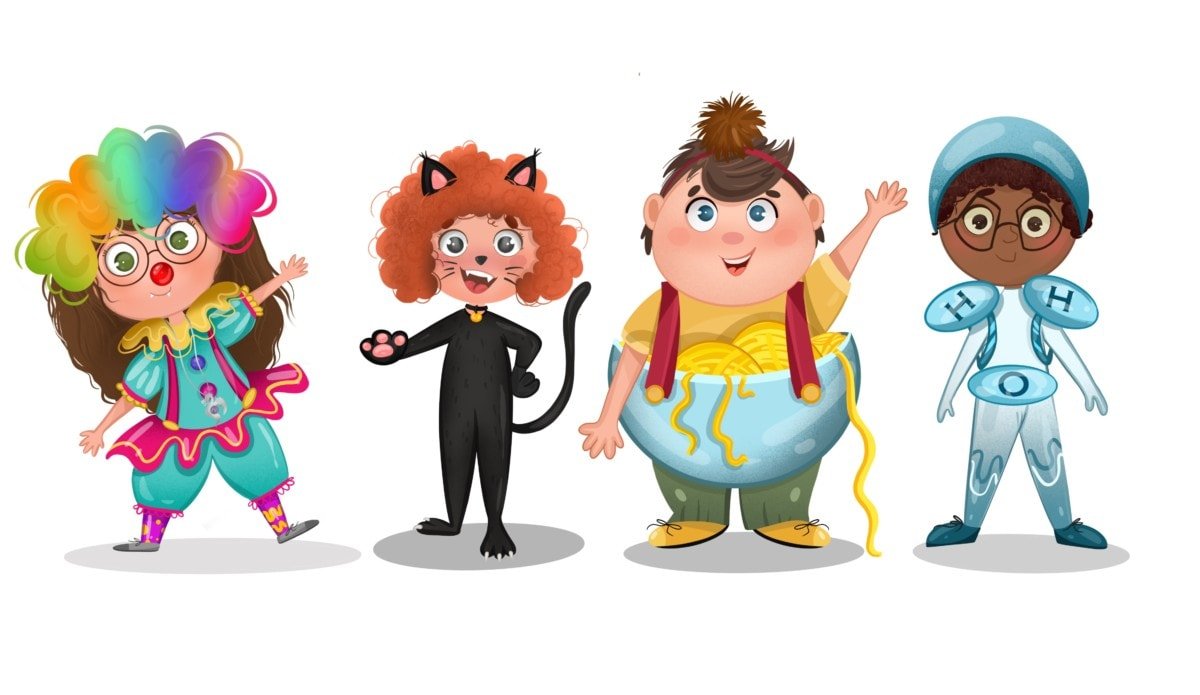 Ellie walked toward the portraits on the wall—the ones that used to contain cats in costumes. Now, it was just a bunch of empty picture frames with sparkling clean glass.

“Wait. Did the cats somehow come to life and escape from their frames!?” Ellie asked.

Tink let out a long sigh. “It must have happened after I adjusted the picture frames. Lou’s never going to let me in his house again once he sees what happened. I am going to be in so much trouble.” Lou was like a mentor to Tink and was always happy to share his science expertise and lab equipment.

Jessica offered him a small smile. “Not if we can solve this mystery and fix it before he gets home!” Ellie and Fez both agreed.

“Start at the beginning,” Ellie instructed, as she whipped her detective notepad out of her clown pocket.

“I came here to pick up the costume that Lou was helping me with,” Tink explained. “I knocked a few times, but there was no answer, so I used the key Lou gave me to get in.”

“I stopped to adjust the crooked picture frames on my way to look for my costume,” Tink continued. “And a minute later, I heard meowing. Then I walked out of the kitchen to this!” Tink dramatically waved his arms toward the cats.

Tink glared at Fez snacking from a blue bag. “Can you crunch quieter?”

“Mmm, what is this candy?” Fez asked.

Ellie squinted at the bag with a cat face on it and stuck out her tongue. “Umm, I think those are cat treats!”

Fez stopped crunching. “Maybe I’ll leave these for the kitties. Pretty good though!” Fez now had a small gathering of cats around him. Including a cat with bat wings pawing at the string dangling from his costume. “Aw, this one likes me,” Fez beamed. He grabbed a piece of paper off the table by the entrance and crumpled it into a ball to play with the bat cat.

“Of course it likes you,” Jessica said. “You’re dressed like a giant ball of yarn and you smell like cat treats.”

“Hey, I’m a bowl of spaghetti!” Fez shot back. “I even have a big meatball.” Fez pointed to the fuzzy, brown pom pom strapped to his head.

“Guys! Focus!” Ellie commanded. She looked over at the empty portraits once again. “We have a mystery to solve. And we need to get it done fast, so we still have time for trick-or-treating.”

“Wait, we might not go trick-or-treating?” Fez asked with a pout. He looked over at Jessica. “You need to stop getting distracted and focus.”

Ellie cut off her catty friend. “Where is Lou?” she asked Tink.

“I don’t know. He said his sister Brie was visiting this week. But I haven’t seen her either.”

Ellie tapped her pen on her notebook. “Maybe you did something in the kitchen that made the cats come to life. I don’t think moving a frame would do that.”

“Not even in a vampire house?” Tink asked.

Jessica put her hands on her hips. “You have been to both my house and Ellie’s. Have you seen pictures come to life there?”

A sweet orange smell wafted through the air of the kitchen. The room was less dusty than the rest of the house, especially the small work area on the island. Lou was known for his science experiments, so it was no surprise that this area was well-used.

The detective team looked for clues, shuffling through the experiment notes, potions, and spray bottles. There were 10 identical spray bottles, labeled everything from “Glass Cleaner” to “Experiment #5.”

Ellie was scribbling down what they found in her notebook when a bunny cat hopped on the counter and knocked down a pan.

The metal pan clattered to the ground, making Ellie's heart skip a beat.

POOF! She transformed into a bat and flapped into an open cupboard.

“It’s just a frying pan,” Jessica said as she picked it up off the ground.

POOF! Ellie transformed back into a vampire.

“Yeah, but a very loud one,” Ellie cried. “You know I can’t control turning into a bat.”

Their search resumed. But after shuffling through the whole kitchen, there were still cats running around everywhere and no clues.

They went back to the living room and Ellie looked at the dusty clock on the wall. Lou could be back at any minute. And if they didn’t solve this soon, there would be no trick-or-treating.

Fez batted the crumpled paper around with a kitten in a witch hat, while Tink paced the room, Ellie looked around for clues, and Jessica tried to wipe the cat hair off her black costume.

“Gah. There is cat hair everywhere,” Jessica complained. “My costume is covered in it.”

“On the bright side, cat hair just makes you look like a real cat,” joked Fez.

“You’ve got to be kitten me. Are you fur real?” Tink added, not being able to resist the cat jokes.

Fez burst into an echoing laughter. “Get it!?” he exclaimed. “Because you’re dressed as a kitten and they have fur.”

Jessica let out a sharp exhale. “You boys are a lot sometimes.” Jessica spotted a lint roller on the end table and wiped the dust off the handle. “Doesn’t Lou ever clean in here?” she asked. “Everything is always dusty and now there is cat hair on top of that.” She stifled a sneeze.

“Lou did say he was going to clean up before his sister came,” Tink said. “He was even making a special cleaning formula to make the job go faster.”

Ellie gasped. “That’s it!” She ran to the hallway and everyone followed, including a few cats still trying to play with Fez’s spaghetti costume.

Ellie ran a finger over the empty frames that once held cat portraits. She showed off her clean finger and was disappointed when her friends all shrugged. “They’re clean!” she announced. “Dust-free. I think Lou got his bottles confused and accidentally sprayed an experiment on the cats that made them come to life.” Ellie flipped through her notepad. “His notes said experiment #5 is supposed to be an animation potion to bring objects to life. There was also a spray bottle with that number.”

“Okay, but if that is true, where is Lou?” Jessica asked.

The front door cracked open and the fat mouse bolted through, followed by the cat in the lab coat hot on its trail.

“Oh no you don’t!” said Fez, scooping up the cat before it could corner the mouse. The determined cat wiggled to get free. Fez tried to hold it on the ground instead, but just as he thought he had it, POOF! the cat transformed into Lou.

“Let me at her!” Lou snarled, narrowing his eyes at the mouse. The mouse waddled back out the door of the house.

Lou pushed the glasses on the bridge of his nose and smoothed back his messy hair—not that it made much of a difference. Then he let out a large sigh.

“Sorry I wasn’t here for costume pickup,” Lou apologized. “My sister Brie thought it would be funny to switch around my spray bottles as a prank.” He squinted at the mouse peeking in the door. The mouse stuck out its tongue. “And sorry about all the cats running around. The animation spray takes a while to work, so I thought maybe you would get here before it happened. But no such luck.”

Tink’s mouth fell open. “So, this isn’t my fault?”

Lou laughed. “Of course not!” He opened the closet door and handed Tink a blue costume with large spheres glued to it and the word ‘H2O.’ “I left you a note on the table by the entrance. It explained that your costume was in the closet and not to worry about the cats. Didn’t you find it? It’s not there anymore.”

A cat dressed as a wizard batted the paper that Fez crumpled earlier across the hall. Everyone looked at Fez happily playing with the cat. Fez looked up when he noticed the room went quiet.

“Why is everyone looking at me?” Fez asked. Everyone giggled.

“Well then, what are we still doing here?” Tink asked. “It’s time to trick or treat!” LISTEN to THE ISLAND ADVENTURE NOW! 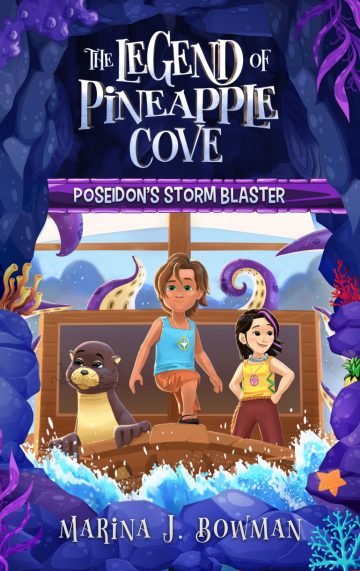 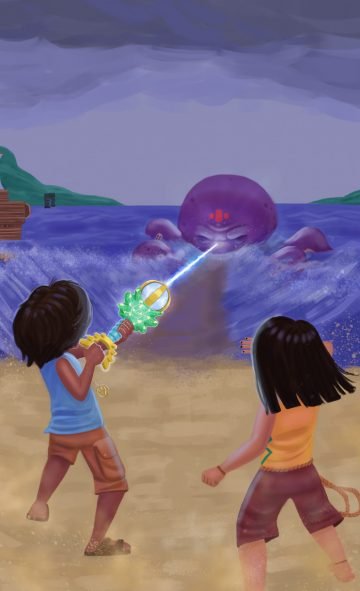 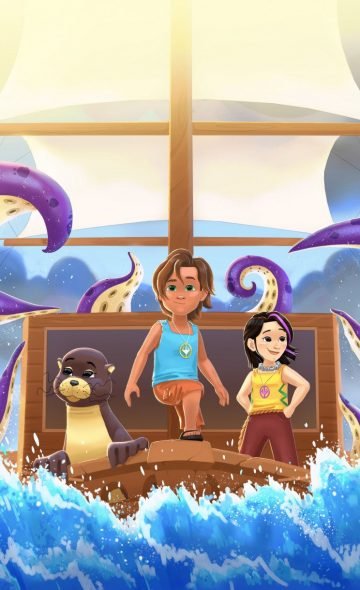